Cora is reader-supported. When you buy via our links, we may earn a commission at no cost to you. Learn more 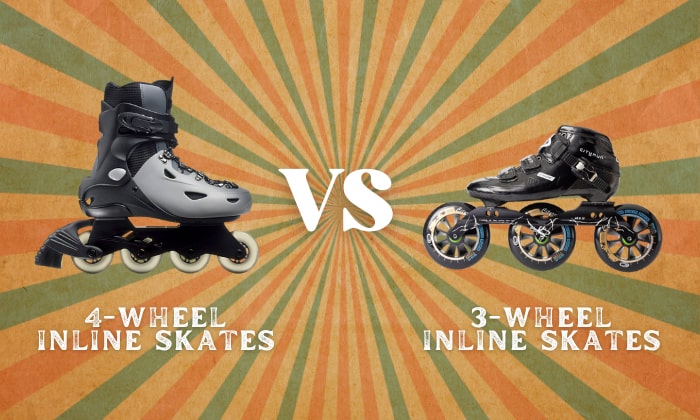 Inline skates can feature different numbers of wheels. There are 2, 3, 4, and even 5 wheel inline skates on the market today. The two most popular ones are 3- and 4-wheel skates. But it can be challenging to compare and contrast them.

So, to save you research time and effort, we have created this detailed 3 wheels vs 4 wheels inline skates comparison guide. Continue reading to find all the essentials.

Here are the brief differences between 3 vs 4 wheel inline skates: 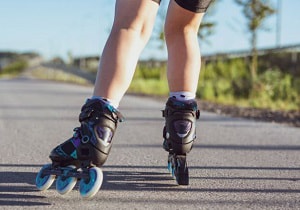 3 wheel inline skates, also referred to as tri-skates, were made in 1819. They are characterized by large wheels ranging from 110-125 mm. As the bigger disks can cover a larger distance faster, these types of skates are often used when quicker speed is preferred. 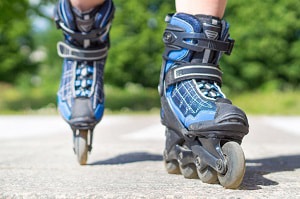 Also referred to as quad-skates, 4-wheel inline skates are around 78 to 84 in diameter. They were introduced in 1863 and have been the go-to type for beginners since then. As such, you can easily find 4 wheel skates for adults and kids alike.

As you might have guessed, the primary difference between 3 vs. 4-wheel inline skates is the number of wheels. Below, we will delve into this difference’s implications.

All inline skates have one central frame and wheels are arranged in a line within it. Thus, inline skates 3 vs 4 wheels both share this setup.

The only difference is that the former has one wheel less than the latter.

Since tri-skates have one less wheel than quad-skates, there is more space within the frame. And so, the size of the rolling disc has room to increase. Therefore, tri-skates tend to have larger wheels, resulting in a taller frame that means going higher off the ground.

On the other hand, to accommodate four wheels, most quad-skates are designed with long frames. Additionally, their wheels are small, allowing the user to stay closer to the ground. 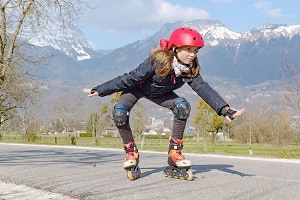 The one-wheel difference between the two skate types drastically impacts their performance, particularly in terms of speed, maneuverability, and stability.

Although you might have heard of 4 wheel speed skates, 3 wheel skates are, in general, faster. They allow wearers to travel quicker, making them the go-to type for speed skaters. In contrast, a higher number of wheels means more rolling resistance and a slower pace.

What’s more, bigger wheels roll faster and, as such, offer quicker speeds. Plus, they retain this pace for a longer time. For instance, if you cruise on tri-skates in an even terrain, you will realize there is no need to push as often.

Thus, if you are seeking the thrill that comes with speed or are seeking prolonged coasting, you would want to go with tri-skates.

Going hand in hand with speed is acceleration, which is the act of speeding up on skates. Skaters on Reddit have mixed opinions on this. Some claim that the ones with three wheels are trickier to accelerate, while some say there is not much difference.

Those that claim the former back themselves up with two main points:

This can be a nuisance for city and commute skaters, as they would have to work harder and drag their feet more to regain speed after stopping at traffic lights. In stark contrast, the smaller wheels accelerate faster, despite having a lower top speed.

Another aspect worth considering when it comes to skating is the smoothness. In general, the smoother the skating experience, the better. The skating surface primarily determines this, but the size of the wheels also plays a role.

Bigger wheels, which characterize tri-skates, can handle obstacles like bumps better. As a result, they provide a more enjoyable skating performance. They also lessen vibrations from the ground, which makes skating more comfortable. 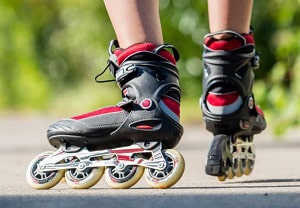 This refers to skaters’ ability to steer and/or make turns while wearing skates. Maneuverability is better with shorter frames, which is often the case for three-wheel skates.

In addition, the middle wheel of the three-wheel arrangement can serve as a pivot point, making it easier to rotate.

However, to pivot on 3-wheel skates, you will have to lean into your turn quite a bit to keep your balance, which requires a lot of practice to master. For four-wheel skates, though, smaller body motions are sufficient.

As with turning, it is more difficult to brake or stop on three-wheel skates. Since there is one less wheel coming into contact with the ground, there is a reduction in grip, making it a challenge to halt to a stop.

The difficulty in braking can be quite a bother when you are speeding on your tri-skates. Plus, it can be rather scary to try three-wheel skates for the first time.

Since tri-skates are taller and further up from the ground; they are not easy to feel stable on. You are more likely to wobble and lose your footing. So, to make sure you stay grounded, it is necessary to exaggerate your body motions.

In comparison, 4-wheel skates are closer to the ground, providing more stability. Thus, if you are new to skating or want to do fancy tricks, it will be easier to stick to quad-skates.

Another reason quad-skates are more balanced is that their wheel arrangement allows for a broader base, and your weight is evenly dispersed over more wheels. Even with small body motions, you can stay balanced.

Aside from performance aspects, 3-wheel skates and 4-wheel skates differ in terms of weight. In most cases, tri-skates are lighter than quad-skates. The latter is generally heavier because it has one more wheel, bearing, axle, and spacer compared to the former.

Since tri-skates are lighter, they can make skating fun rather than tiring. You are less likely to feel weighed down. As such, your skating sessions can also last longer.

If you want to travel long distances on skates, it might be better to opt for three-wheel skates. 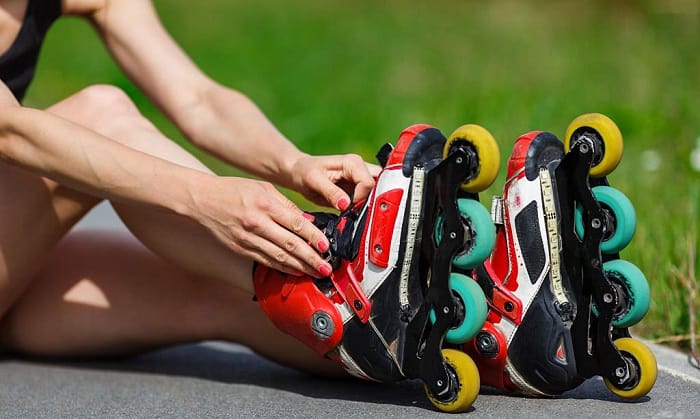 For most inline skate brands, larger wheels are more expensive. Therefore, it stands to reason that three-wheel ones cost more. However, the price tag can also depend on other factors, such as the bearings and design.

Four-wheel skates are usually more complex, featuring more sophisticated bearings, so their price can go up in this regard.

Since the line is blurred when it comes to cost, you should not choose between the two types of skate with only this factor in mind.

Three-wheel skates, given their arrangement, are better for long outdoor sessions, cross-training routines, and freestyle performance. That being said, you can infer: tri-skates are fitting for longer endurance skating in even terrain such as the urban.

On the other hand, four-wheel skates are highly recommended for newbies. They are also great for those who prefer to spend more time practicing straight-line or marathon skating. If you want to practice complex tricks, quad-skates are also more suitable due to the stability they provide. 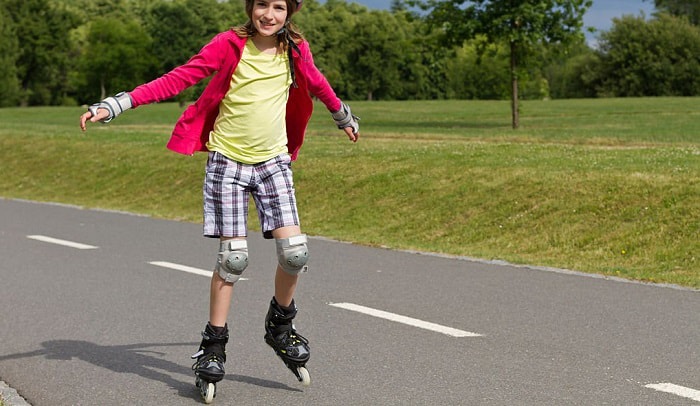 Is it better to have 3 or 4 wheels on rollerblades?

When contemplating 3 wheel vs 4 wheel rollerblades, you should think about your skating level, needs, and wants. If you are buying gear to learn to skate for the first time, we recommend the 4-wheel setup.

In contrast, you get less stability with three wheel rollerblades or rollerblades big wheels, so it’s more difficult to get used to. You should not consider these options unless you are already experienced or are looking for an upgrade to challenge yourself.

Why do some rollerblades have 3 wheels?

Rollerblades with three wheels are made for skaters who are willing to give up stability for speed and other aspects as discussed above. These are becoming increasingly popular along with speed skating.

Now, you know the essentials to 3 wheels vs 4 wheels inline skates. The former tends to have larger wheels and taller frames, which allows them to reach and retain higher speeds, as well as provide a smoother and lighter skating experience.

In contrast, quad-skates have small wheels within shorter frames that offer more stability and a faster acceleration rate, especially for beginners.

Which one fits you? Let us know in the comments down below!