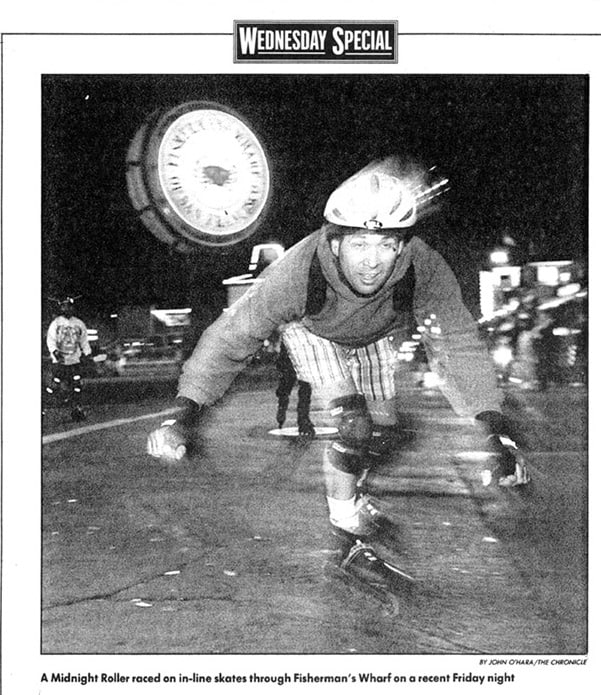 SKATERS, UNITE! A cheery revolution surges down San Francisco streets each Friday night. To join scores of comrades, all you must do is buckle wheels on your feet, then display a light heart. It also doesn’t hurt to show up with stout calves, physical agility and a strong aerobic capacity.
Ranks of this motley brigade, dubbed the Midnight Rollers, have swollen steadily since 1989, when such Friday outings began. The peak count, hit last fall, was more than 600 skaters. Last Friday, more than 300 showed up for this informal street fete. People rolled in by BART and car pool from all around the greater Bay Area. Dutch student Yuri Engelhandt, 23, even toted skates here from Amsterdam, so he could include the Friday Night Skate among his vacation highlights.

David Miles, 40, a longtime figure on the San Francisco skate scene, is ringmaster of this street circus and an exemplar of its offbeat dress code. Miles drapes his helmet with a long, sequined cape and a row of twinkling Christmas lights. Not only that, he wears one quad (four-wheel) skate on his left foot and a blade (in-line) skate on the right. This schizophrenic gear helps him do the skate-dancing moves that are his pride.

At a Ferry Building lot used as the starting point, Miles turns down the volume on a stereo blasting out the open doors of his van and grabs a microphone. “Tonight, please spend a silent moment thinking about poor skaters that can’t have our kind of fun, ’cause they’re stuck in snow up to here.”
Via newsletter, rumor and the World Wide Web, word of this weekly frolic has spread far and wide. What do these skaters seek? As 13 year-old Jason Barnes (who’s come from Manteca for years to do Friday nights with his dad) says: “San Francisco is the best place in California to skate. You got your hills, flats, good scenery. At night, cars and street lamps make a light show for you in the dark.

Barnes finds his sole bummer in hostile taxi drivers. “Cabs always honk, zoom by, try to intimidate us. Skaters must be their worst nightmare.”
The pack, with red helmet lights flashing, shoots like a ragged train of comets along the street. The mass of skaters circles a herd of tourists at Pier 39, then cruises past the steaming crab pots of Fisherman’s Wharf. At Aquatic Park, some hotshots skate backwards down a spiral staircase and jump over the hoods of parked cars.

After cresting the Fort Mason hill and gliding past the Marina, skaters reconvene under the rotunda at the Palace of Fine Arts. In some ways, this is the evening’s defining moment, an unmasked ball amid the deserted, grand colonnades. Boom boxes are cranked. The skaters form conga lines, spiral dances, a happy mob taking temporary possession of smooth and unused pavement.

Then on, on! . . . Like Hash House Harrier runners, the skaters carve a zig-zag path down city streets. A brief pause at the City Pantry store for snacks leads into a run down the sidewalk of the Broadway Tunnel, a full-fledged charge down the Stockton Tunnel, then a bout of renewed stunting on the steps of Union Square. The Powell Street BART station is a stop, then nightclub row at 11th and Howard.
Finally, their ranks somewhat thinned by now, the skaters arrow down Townsend, sprinting for home base at the Ferry Building. David Miles — in his mirrored kaffiyeh looking like the Saladin of skating — and habitues like lean, blonde-maned Bill Hetzel, 34, serve as outriders. .

But very little patrolling or scolding of even new or out-of- town skaters seems required. The envelope of Miles’ “rules-of-the- road” is ripped only a little, and San Francisco drivers, with consummate urbanity, accept and flow around the mob of skaters with nary a horn honk. Even the City cops “stay cool” with it.

Back at the Ferry Building lot, his van stereo cranked up hot, Miles surveys the dancing skaters with satisfaction. “I love the energy, man. This is the best,” he says. “It’s what San Francisco is all about.”

Seventeen years ago, Miles was a bricklayer from Kansas City, coming in on a Greyhound, looking for a new life on his last unemployment check. He found it on his third day, among a small group of outdoor skaters gathered at the Golden Gate Park band shell. Now, he’s the maven of skates, a leader in the conspiracy of street fun.

Even the Port Commission has been seduced. Ferry Building security guard Mae Lois Smith has taken the skaters under her wing. She patrols the lot while the skaters are out, to halt vehicle break- ins. I love these kids and what they do,” Smith says. “I protect them like they are my own.