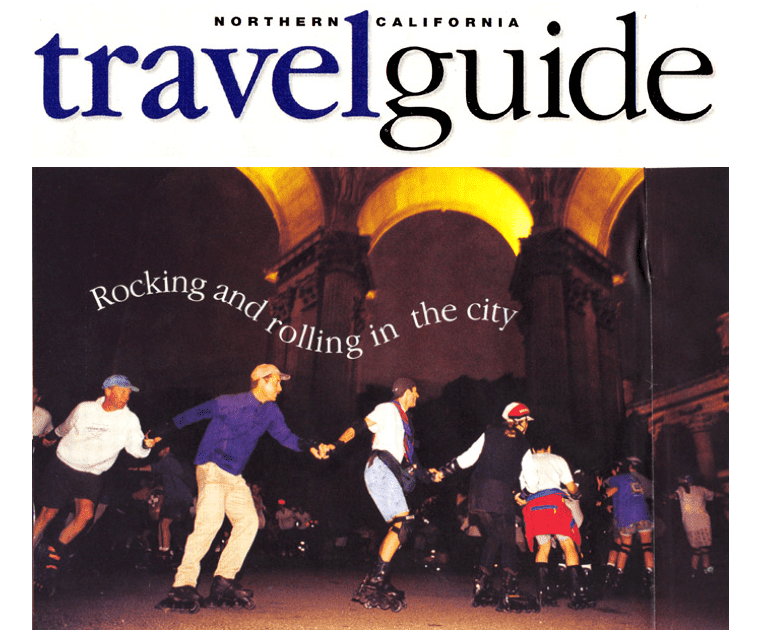 There’s safety and fun in numbers when hundreds of in-line skaters take to the streets.

By Ian Stewart
At Justin Herman Plaza, techno music blares into the night as a call to arms. In answer, in-line skaters begin to gather by the dozens. Two 6-foot men, towering with their skates on, perform a dance routine from Adventures of Priscilla, Queen of the Desert. A 6-yearold zigs among stunned tourists like Elroy Jetson in a jet pack.

Welcome to Friday Night Skate, a get-together of aficionados who take to San Francisco’s streets every week to test their skills, see old friends, get a good workout, and just generally celebrate the joys of in-line skating.

After some encouraging words and safety tips from organizer David Miles, the entourage,now 400 people strong, departs for a 12-mile ride through the city, during which its famous areas glide past like a surreal living travelogue: Fisherman’s Wharf; the Dolphin Club near the Maritime Museum; the Marina Green; and the Palace of Fine Arts, where 100 or so skaters play a loud, boisterous game of crack the whip.

After nibbling snacks and taking a break in Cow Hollow, the skaters cruise along Polk Street, experience a roaring ride through two tunnels, and take another rest stop at Union Square, before heading back to Justin Herman Plaza (via South of Market). It’s a little weird, a little crazed, but as a tour of the city, it sure beats riding those goofy cable cars on wheels.

When: Every Friday night, from 8:30 to midnight.
Where: Justin Herman Plaza at the Embarcadero and Market St.

FYI: All levels of skaters are welcome, but expect hills, tunnels, trafflc, and pedestrians. There are lots of rest stops. Be sure to bring your helmet and pads, as well as water, food, and fun money.