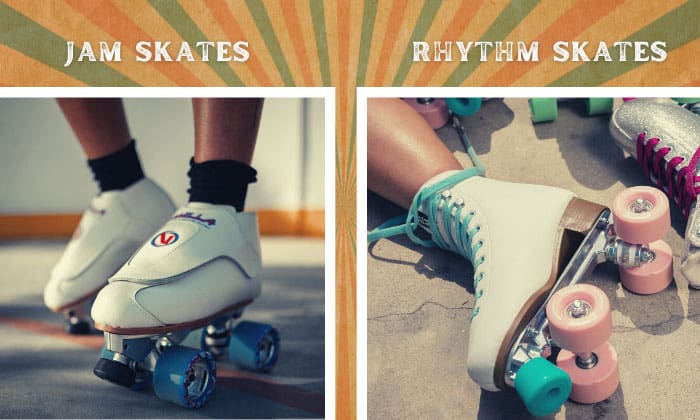 For beginners joining the skating realm, one of the first things to understand is the different types of roller skates available. In this blog post, we will take a detailed look into two dancing skates: jam skates vs. rhythm skates.

We will go through all their similarities and differences, including specifics on their moves, boot design, laces, wheels, and action plates. To get a solid grasp on both, read until the end! For now, you can check out the brief comparison between the two kinds of skates.

What Is Jam Skating & Rhythm Skating

Jam skating came about in the 1970s as moves to jam to (pun intended!) disco music. While it still holds onto its artistic expression in the early days, jam skating has also adapted to more contemporary music and break dancing. It can be done as a recreational activity and as a sport; there are many modern jam skating competitions.

Rhythm skating also involves dancing. But it is slightly different from jam skating. It is primarily moving to the rhythm of music, as the name suggests. Rhythm skating revolves around more old-school moves and, specifically, shuffle skating. It sometimes goes by the name JB skating.

Despite both being forms of dancing, jam and rhythm skating vary in techniques and movements, resulting in different requirements for footwear.

When you compare jam and rhythm skates vs regular skates, you’ll notice that the formers are made for dancing. In contrast, regular footwear for conventional skating may not be compatible with dancing. 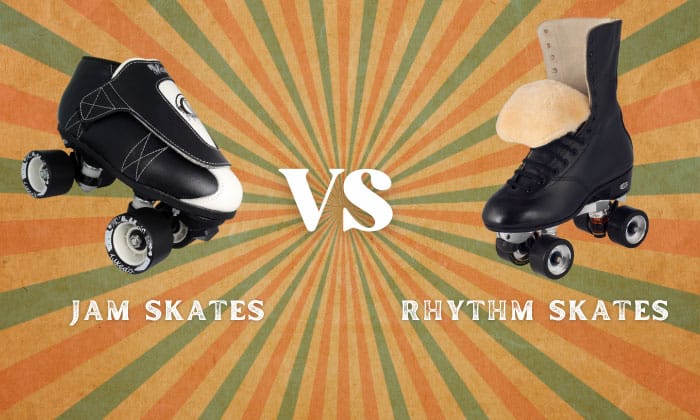 The biggest difference between rhythm skates vs. jam skates is the boot design. The former is characterized by high-cut boots, which are higher and cover the ankle entirely. This allows them to provide more ankle support without sacrificing flexibility.

Jam skates, on the other hand, are low-cut. They stop below the ankle, providing more flexibility for fast, agile jam skate moves. If rhythm skaters wore jam skates, they would fall more easily and sustain serious injuries.

Another difference is the front of the boot’s width. Jam skates are wider than rhythm roller skates. This means that the former has more foot room, delivering more flexibility as well as mobility.

Skates for jam skating do not include laces. As a result, your feet can flex more comfortably. The lack of laces is also a safety measure. You will not have to worry about tripping over undone laces while you perform your stunts.

In contrast, rhythm skates have laces. Rhythm roller skating typically keeps all wheels on the ground, so there is no concern about the laces getting in the way. It does not offer as much room for flexing, but this is enough for the simple nature of bouncing to music rhythms.

The wheels of rhythm skates are thinner and harder. This difference encourages rhythm skaters to pivot, turn, and spin more easily and quickly. Jam skaters trade this off for better surface grip and shock absorption. And unlike rhythm skate wheels, jam skaters’ wheels are most often fatter and softer.

In general, jam skates are often more expensive than rhythm skates. Whereas the latter can set you back roughly $140 to $360, the former tends to cost at least $200, with products from reliable brands coming at $640 or more. 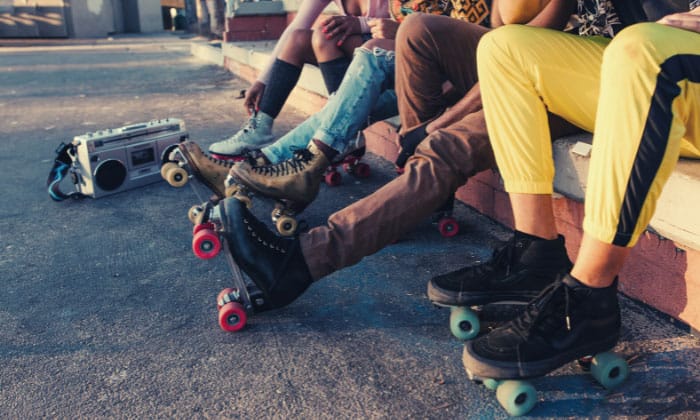 Jam skates and rhythm skates. Why does knowing this matter?

Being able to distinguish between jam skates and rhythm skates is necessary because you cannot use the skates interchangeably. In other words, you cannot wear rhythm skates for jam skating, and vice versa.

Knowing the differences between the two can help make your selection process less difficult. You will also gain an idea of what you can expect from your chosen skates.

Which skates are better for dancing? Jam skates or rhythm skates?

Both skates are made for dancing. There is no “better” one out of the two. It depends on the type of dancing you are looking to enjoy. If you like hard break-dancing, jam skates will be better, but if you like R&B dancing and old-school moves, rhythm skates will be preferable.

Jam skates vs. speed skates. Are they the same?

Speed skates and jam skates are marketed separately. Speed skates are also low-cut, but they are not necessarily designed for dancing like jam skates. You can easily tell the two apart by checking if the shoe feature a toe stop—if they do, they’re speed skates.

Regular skating vs. dance skating? Which is better?

Regular skating is just about gliding across a surface. You would need to master both indoor and outdoor surfaces and upscale your skills with tricks.

Dance skating is more artistic in nature. You would have to align your skating moves with the music. As such, it requires more precision in terms of timing.

If you like dancing and find it exciting to do so on wheels, dance skating will be better. But if you just want to pick up skating for leisure or to move from one place to another more easily, regular skating will be ideal.

As you have read, jam skates vs. rhythm skates share some similarities but also differ in a number of aspects. They are both made for dancing, but one is more focused on timing, while the other is more about freestyling.

Jam skates are low-cut and equipped with fatter, softer wheels to accommodate breakdancing and similar dancing styles, whereas rhythm skates are high-cut with thinner and harder wheels.

Now that you know their similarities and differences, you can decide on the better one for you. Which one do you prefer? Let us know in the comments down below.