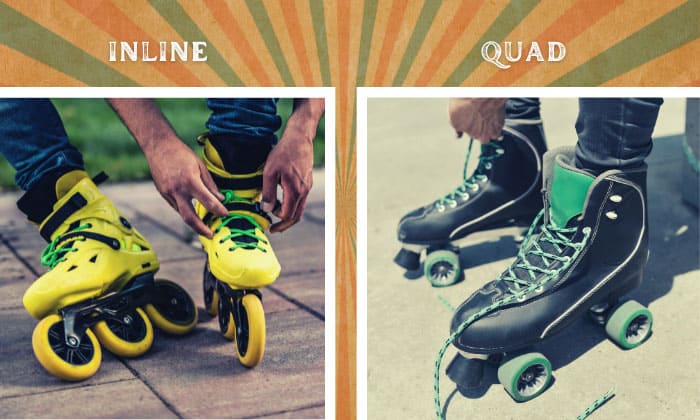 Should I choose inline skates or quad skates for roller skating? This is one of the most common questions we get from our skater readers. So, we have put together this inline vs quad skates article!

Both types of skates have their pros and cons, and which one to pick depends on your own skills and preferences. Keep reading to find out about their key differences. By the end, you should be able to settle on one of the two! 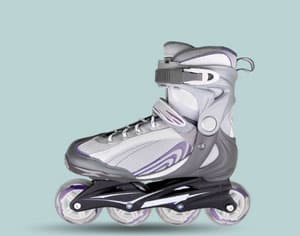 Inline skates are skates with a single line of wheels. Depending on users’ preferences, the number of wheels can range from 2 to 5, with 3 and 4 being the most common option. As they can travel fast, even on rough surfaces, these are ideal for outdoors skating. 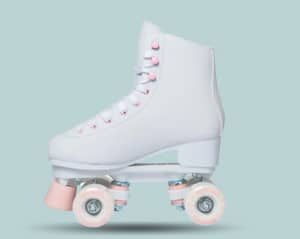 Quad skates have a box-like wheel setup, meaning they have two wheels in the front and another two in the back. While they’re suitable for exercise indoors, the 4-wheel roller skates can also be used outside as well. 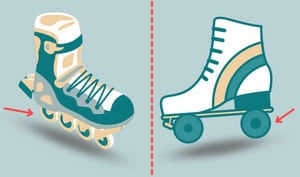 The difference in how the wheels are set up for quad skates vs. inline impacts skaters’ balance. Quad skates provide lateral stability, so skaters can easily hold themselves upright. In contrast, inline skates offer length-ways stability, making it less challenging to propel forward. 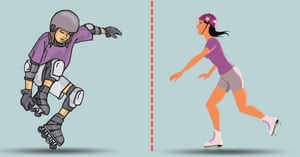 The width of wheels on quad skates is wider than that of inline skates. So, there is more surface coming into contact with the ground. This means that when skaters encounter small obstacles, such as rocks, they might be thrown off balance.

Inline skates with slimmer wheels are less likely to suffer from this. When coming into contact with pebbles, inline skates will simply slide to the side to pass them.

The takeaway here is: if you are using quad skates, it will be better to glide on smooth surfaces, like those indoors. For the outdoors, however, inline skates will be preferable.

Inline and quad skates have different shells. The former’s shell is semi-rigid or rigid, whereas the latter’s tends to be softer and more malleable. This factors into ankle support and performance flexibility.

If you try to bend the shell of roller skates inline vs. quads, you will clearly see the difference. Inline skates, with their stiff nature, help hold your ankles. But they give up the ability to flex and move freely. Quad skates offer the opposite. Hence, you can be more reactive in them. 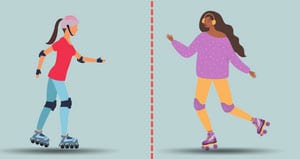 Quad skates have a toe stop for braking, and it is positioned at the front. In contrast, not all inline skates include one, and if a pair does, it would be at the back–this would be called the heel brake.

So, as a skater, you will need to practice different techniques to pull to a stop. To use the front toe stop, you would have to master turning and placing enough weight forward.

As for the heel brake, you must learn to shift weight to one foot and slightly bend your knees to apply enough pressure onto your heel.

The added requirement of turning and leaning weight to the front can be trickier for beginners. But many first-time skaters on Reddit have shared that they are not as comfortable leaning back on their heels. So, it really narrows down to personal preference. 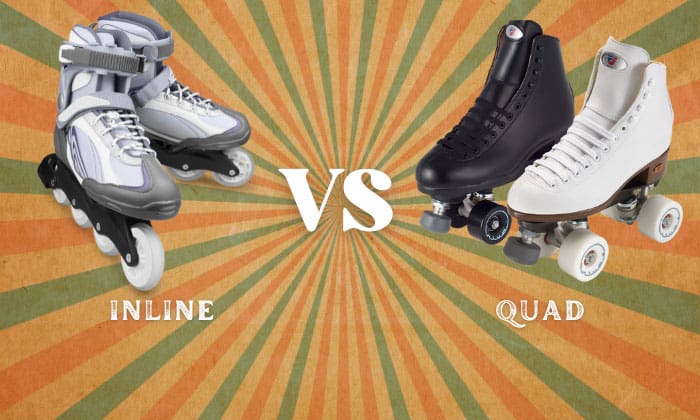 This is an important factor that should be considered when weighing quad and inline skates.

You should choose quad skates if you want to do:

Go with inline skates if you want to do:

If you plan to roller-skate outdoors, then inline skates are your best bet. As mentioned above, they can easily dodge or pass small obstacles. In contrast, quad skates will get stuck and be forced to stop. This might cause you to fall over, as well.

It is important to determine your skill level and experience to find an appropriate match. If you already have loads of experience, then quad skates’ beginner-friendly features will not matter to you. Instead, you can go straight for inline footwear.

Another minor thing you must consider when buying a pair of skates is your gender. Inline skates women use, for example, are designed with a slimmer profile than men’s. This also applies to quad skates for adults and kids, where the design may differ for males and females. 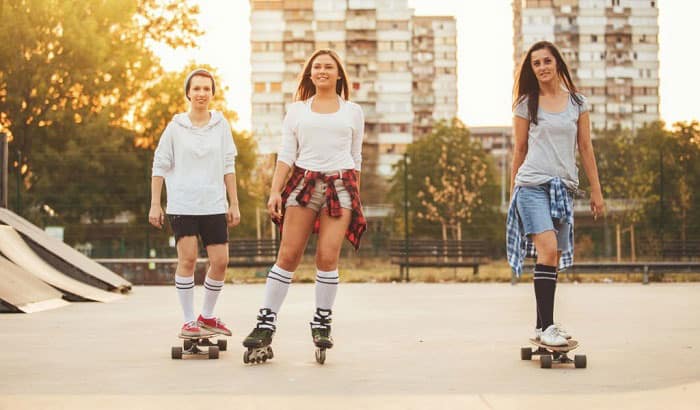 Which skates are better: inline or quad?

The “better” skates are the one that suits you.

Inline skates are better if:

Quad skates are ideal if:

Are inline or quad skates better for beginners?

Are quad skates easier than inline skates? For beginners who have no experience in keeping their centers of balance, quad skates would be a better choice.

However, this only applies to indoor skating. As inline skates provide a smoother ride on rough terrains, beginners will be less likely to get intimidated by skating outdoors. Plus, they can always consider going from inline to quad skates later.

What is the difference between rollerblades and inline skates?

Check this Youtube video on inline vs quad skates for more reference.

So, there you have it! All the essentials to inline vs. quad skates. With their main differences up your sleeves and relevant questions answered, like “Are inline or quad skates easier?” it is possible to make your final call.

Will it be the inline, which offers lengthwise stability and more ankle support, or the quad, which has flexibility for maneuverability and mobility and deals with small obstacles easily? Share with us in the comments down below.