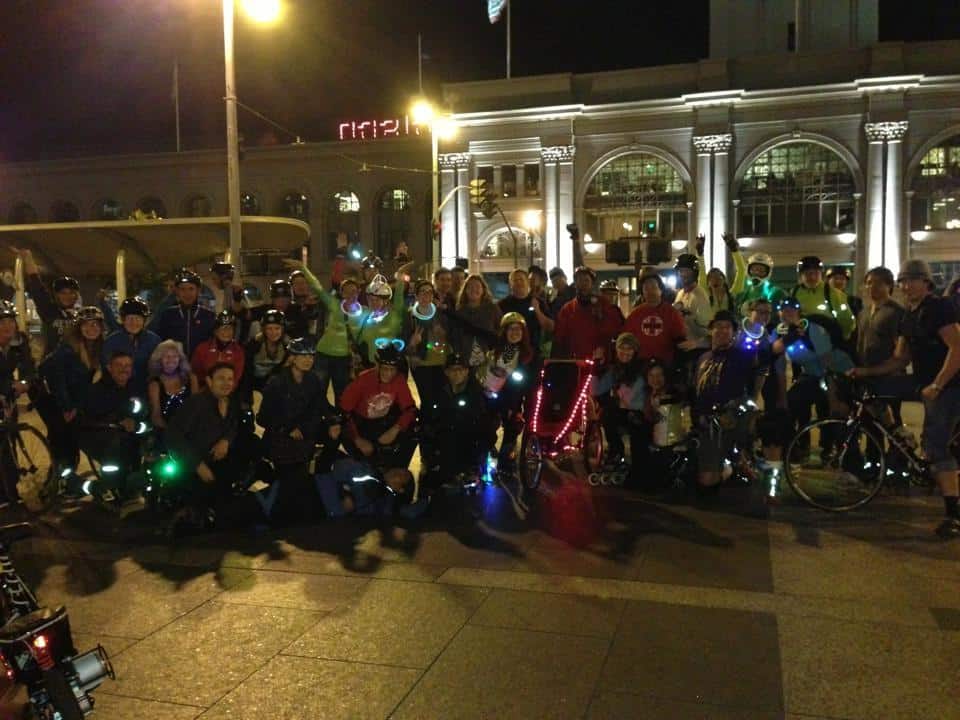 What is there to do on Friday nights in San Francisco? Many people go out on the town to enjoy fine dining and dancing. Some enjoy a show or go to the movies. Some like to go hang out in the Haight Ashbury, the Castro, maybe SOMA and still others like to spend a quiet evening with a book or watch TV. For many, Friday night means strapping wheels on your feet and joining the Midnight Rollers for a fantastic roll on one of San Francisco’s most exciting nocturnal events – the Midnight Rollers Friday Night Skate

The Midnight Rollers “Friday Night Skate”, is one of San Francisco’s hottest happenings. The Midnight Rollers is a group of skaters both inline and rollers that gathers every Friday night to skate the city streets. Skaters come from all over the Bay Area, other parts of the country and around the world to be a part of this positive energy mass.
In 1989, the Loma-Preita earthquake severely damaged the Embarcadero Freeway. This double decked, elevated freeway was closed to all traffic while the city planners could decide what to do with it. Soon members of the Golden Gate Park Skate Patrol found an irresistible urge to skate on this newly discovered skater’s paradise. The roadway was hard, smooth concrete with long downhill sections that was a skater’s dream. There were no cars to run you over. Many skaters were given tickets by the Highway Patrol and by 1991 the freeway was torn down.

Even though the Embarcadero Freeway was torn down, the skaters still wanted to skate along the Embarcadero waterfront. A new route was created. The meeting day was changed to Friday. There were about 15 to 30 skaters showing up on a regular basis. The numbers soon began to grow to 20, 30 and 40. By November 1993 there were over 200 skaters on the Friday Night Skate. The San Francisco Independent and the San Francisco Chronicle began running stories about these “crazed” people skating around at night. The numbers began to skyrocket to 250, 300 and 350 within a month. The group reached its highest numbers of 700+ skaters in the summer of 1996

The Midnight Rollers Friday Night Skate is now a part of what makes San Francisco a fun and exciting city. They meet every Friday night in Ferry Plaza, the area across from the Ferry Building on the Embarcadero at the foot of Market St. Skaters arrive at about 8:45 P.M. They skate and dance in the plaza as the beat blasts from stereo. At 9:00, the skaters take off with a roar over the microphone.

The first stop is Pier 39. Tourists stand mesmerized as hundreds of skaters roll by like the wilderbeast on Wild Kingdom. The scene is the same as the skaters roll past Fisherman’s Wharf to Aquatic Park. The first uphill climb comes as skaters pass Muni Pier to Ft. Mason. After catching their breath, the skaters will skate past the Marina Safeway store, down Marina Blvd. to the Marina Green and across to the Palace of Fine Arts.

From the Palace, we will then take off in a zig-zag route through the Marina District to Union and Fillmore Streets. This is the halfway point. We pack the place as we get food and drinks. We can rest for a while and find the people you came with. After about 10 minutes, the skaters take off along Union Street heading for the next stop, is Helen Wills Playground (we call “Hell on Wheels” Playground).

After a brief rest at the playground we will skate through the Broadway Tunnel and gather together at the end. We will continue down Broadway to Stockton St, l turn right on Stockton skating through Chinatown and the Stockton Tunnel to Union Square.

At Union Square, the skaters will relax for about 5 minutes, jumping and performing tricks. The groups performs the “Thriller” dance as the crowds watch with delight. We plan to begin doing the “The Serpentine” that we used to do at the Palace of Fine Arts, but that surface has become too rough.

From Union Square,the skaters roll down Powell Street to the the Powell St. Cable Car turn around at Powell and Market St. Here is where some of the inline daredevils strut their stuff turning the escalators into an Olympic Stair Riding Competition. Steve, Lainie, Carla and others approach the escalator at top speed and roll with a thunderous roar down the stairs as the crowds go wild. We do this for about 10 minutes. After the police get a chance to watch a few runs, the crowds applaud and we take off for the Concrete Canyons

From the Powell Street escalators, the skaters roll down Market Street towards the waterfront. After we pass 3rd St. the skaters take the action through a maze of alley ways, building passageways and sidestreets called the “Concrete Canyons” We follow this route all the way to the Hills Brothers Coffee building at 1st and Folsom where we skate in a circle around a statue we affectionately call the “Coffee God”. We come out on the Embarcadero near the “Bow and Arrow and skate back to the Ferry Building where we began.

There is a fragile relationship between the skaters and the police. They like us for the most part. As long as we don’t cause a problem, the police don’t hassle the skaters. Over the years there has been citations given to skaters for running red lights and one skater was thrown into a police car, harassed for about 40 minutes and forced to leave the police station without skates on. Since then, we have developed guidelines that will keep the police off our backs and everyone safe.

RULES OF THE ROAD

1.Wear helmets and protective gear. Use vista lights or reflective material on your skates or body.

2.Always skate on the right side of the road. Do not block the free flow of traffic.

3.Yield right of way to pedestrians. Be considerate and respective of others. Don’t your skating endanger others.

4.Never skate in the street through the Broadway Tunnel.

5.No skitching. Make it up the hills on your own. Do not hold onto cars, busses or other vehicles.

6.Do not drink alcohol during the skate.

If you can’t follow these guidelines, then stay at home. No one wants to see your body underneath a bus or car. The skaters wouldn’t appreciate some idiot jeopardizing our fun. The streets are not the place for you to prove yourself. You don’t have to be an expert skater to do this skate, but you must be able to stop and skate up hills.

Bring:
+ Skates
+ Protective gear, especially your helmet
+ Water
+ Fanny back to carry money for snacks.
+ Blinker if you have one.
+ Cellular phone