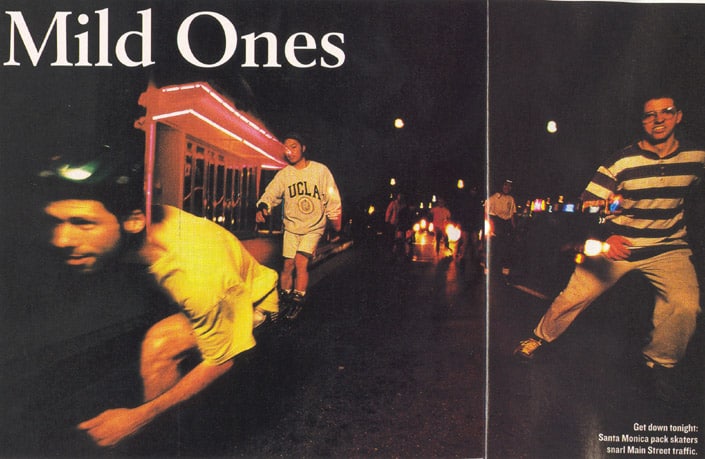 Raucous packs of in-line skaters are commandeering city streets all over the world.

Like Brando
and the Wild
Ones but with
smaller wheels

Forbes4-2-00.jpg (109085 bytes)
IT was an otherwise calm Friday evening along Montana Avenue in Santa Monica,Calif. I was strolling with a friend past the chic outdoor cafes when suddenly-whoosh! Dozens of brightly clad nutters on in-line skates suddenly shot by to the wild strains of “Ride of the Valkyries” blaring from a boom box on the ringleader’s back.
. It looked exhilarating and slightly dangerous at the same time–Marlon Brando and the Wild Ones with smaller wheels and day jobs. “Who are you?” we yelled, but they were moving too fast to chat. If you want to know about these characters, you’re supposed to go to fridaynightskate.org.

Fast forward a couple of weeks. This time it was me standing on top of Montana Avenue with the same pack of 40-odd breathless revelers. Some carried flashing red reflectors, one wore a helmet festooned with white Christmas lights. We’d already skated some seven miles at this point, provoked a police man who blasted his horn at us and stopped traffic as startled onlookers yelled encouragement.

Montana’s steep slope fell away before us at 20mph, making it problematic to stop for red lights. Our leader, Christopher, punched on the Wagner, and we moved on. I giggled from nerves. So did Craig, the bad-boy mortgage broker next to me.

Fueled by the internet, this scene gets repeated in cities all over the world on any given night of every week. Not only does the Web provide a means of rallying disparate groups of skaters through email lists, it lets them know where and how to assemble.

Paris is the big daddy of pack blading. On Friday nights an average of 20,000 skaters stampede past the Place de la Concorde and the Eiffel Tower. They even get a police escort.

These excursions exclude no one. “The idea of skating at night never occurred to me. It seemed sort of ridiculous,” says Nathaniel Antler, a 61-year old San Diegan. Antler had never donned blades until a fifty-something neighbor coaxed him into them a few years back. On his first time out he completed a 20 mile night skate in San Diego, from the beach to downtown. “I was hooked,” says Antler. “As far as a late-life crisis goes, it’s a little more fun and a lot less dangerous than a motorcycle or a mistress.”

It all started ten years ago in San Francisco. A group of skaters led by pied piper David (D) Miles began skating the abandoned stretches of the Embarcadero Freeway shortly after the 1989 earthquake. After the highway was demolished in 1991 Miles and his followers took to the streets and showed the rest of the world how to do it.

Every Friday Miles and several hundred “Midnight Rollers” still assemble at the Ferry Building, and head to Ghirardelli Square, the Palace of Fine Arts and beypnd. Mercifully, the route avoids the city’s steep hills, but it’s still taxing.

Regulars like Tsutomu Shimomura wouldn’t miss it. He’s the Web sleuth famed for tracking down hacker Kevin Mitnick. There’s a vaguely cultish undertone to the San Francisco skate. At its peak it draws 700 bladers, making it the biggest pack skate in the U.S. Says Miles, “It’s a movement.”

On the Friday of my first night skate, the crew of 40 gathers. Every age is represented. Christopher straps on a homemade harness he’s rigged with a car stereo and a couple of computer speakers, and we’re rolling toward Venice Beach on the wings of K.C. and the Sunshine Band (“Do a little dance, make a little love!”).

I haven’t skated for three years, but my rustiness vanishes as I pick up the rhythm of the group. An experienced blader encourages me to hang on to his waist as we hurtle down into Santa Monica Canyon. Next time solo, I promise myself. Two people take mild spills. One girl gets her foot stuck in a sewer grate. On the whole, injuries are rare, although helmets and wrist guards are strongly recommended.

Thomas Grosspietsch, an art director for Leo Burnett in Chicago and a devoted night skater there, braved a monstrous Paris skate last summer with 65 other Americans. One of his friends timed how long it took the pack to roar past at full tilt: 20 minutes. Earlier that same week the Pari-rollers had taken their American visitors on a Monday night “boy-girl skate.” (Men and women take off in opposite directions and the boys hunt down the girls.)

This got Grosspietsch thinking, and he is now organizing themed Friday night skates past the historic sites of his native city. Upcoming ones will include a gangster skate, a blues skate a junk food skate. Last summer Grosspietsch led a skate that traced the entire area burned in the Great Chicago Fire. And of course the city’s historic beer halls are the last stop on every itinerary.

All of which demonstrates that while a night skate provides a nifty alternative to the pub, it doesn’t guarantee you won’t end up there.

The route: 25 kilometers past Notre Dame,

the Pompidou Center, the Bastille and back

to the starting point at Place d’italie.

The pace: Fast. but not as fast as Paris.

The route: 12 miles from the Ferry Building, past Ghirardelli Sqoare to the Palace of Fine Arts, through Union Square and back to the start ,

The numbers: 40 to 50 people every first and third Friday of the month.

The pace: A mellow groove with plenty of stops for stragglers to catch up.

The route: Just under nine miles, from the Santa Monica pier to Venice,

The vibe: A funky party on wheels. fridaynightskate.org

The numbers: 15 to 50 people every Tuesday night.

The pace: Medium to extremely fast.

The vibe: laid back. friendly. No music. Open to newcomers.

The route: II to 12 miles along the lakefron1 bike path (more laid back than the monthly themed skates).

The vibe: A rolling meat market. bworld,com/rjr (to get on to group e-mail list)