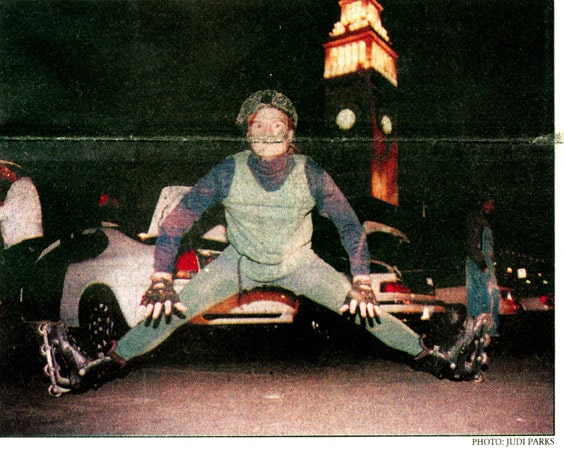 Call it zany, call it reckless, but don’t call the Friday Night Skate “blading.” . “That is the corniest, preppiest term,” says Lori Solay, 29, of the Castro, a longtime veteran of the roller event.

The weekly affair – in which an army of skaters swoops through the city’s northern neighborhoods on a 12.~mile course – has grown from a cult obsession to a national phenomenon, with more than 600 participants turning out for a recent run.

“It’s the most fun you can have on a Friday night,” said Dan Filner, 25, who comes from Oakland for the Skate.

“People fly in here for vacation,” boasted organizer David “D” Miles, the president of the California Outdoor Roller-skating Association who is regarded by many as San Francisco’s “Godfather of Skating.”

The event’s mythic status has much to do with the wacky showmanship of the skaters themselves.

Decked out in sequins, reflector badges, and glowing “spaghetti” wands, skaters cruise their way through the neighborhoods at night with a goofy sense of camaraderie that Miles calls “Disneyland on wheels.”

Skaters are the first to admit they make strange bedfellows, but, after years of skating together, liaisons are inevitable, it seems.

“I met mygirifriend on the Skate and we skate together,” said Filner.

“When you meet someone and there’s a common ground, it’s going to happen,” said Solay, who called the skaters an “incestuous” group.

There’s a terminologv that goes with the show as well. Old pros are “agro” skaters while “skate rats” tear up the pavement with an aggressive passion. “Skitching,” or holding onto cars and buses when going uphill, is strictly prohibited.

Shuttling an army on wheels through crowded sidewalks and Friday night traffic certainly isn’t the easiest task, and local police report some complaints from flatfooted San Franciscans who have to endure their skating brethren on a weekly basis.

“Every once in a while, they will cause a problem and we will follow up on it. They’re fairly cooperative,” said Captain Mike Yalon of Southern Station.

Skaters take off from the parking lot across from the Ferry Building at 8 p.m. after a short inspirational rally. A quick zip to Fisherman’s Wharf via Pier39 leads on to the Marina and the Palace of Fine Arts.

Weaving back along Fillmore and Union streets, the skaters head through the Broadway Tunnel into Chinatown, and to Union Square by way of the Stockton Tunnel.

A tour through the South of Market area takes the troupe back up the city’s eastern shore to its starting point.

Skaters first took over the area in l989 after the Loma-Prieta earthquake forced the closure of the doubIe-decker Embarcadero Freeway. They traversed the abandoned structure until it was torn down, at which point the new route along the waterfront was created.

The original group of 15 to 30 skaters quickly expanded, and soon contingents were arriving from Stockton, Sacramento, and Santa Cruz.

“Fish,” a 27-year~ld from Hayes Valley, is a Skate regular. “Some people go to church on Sunday mornings, I come here on Friday nights,” he said outside the Ferry Building before a recent tour.

Stu Goddard of the Richmond District, a regional sales manager for an electronics company, says he’s another regular participant. “It’s the end of a long work week and it’s good exercise,” said Goddard, 50.

Mass skating can be difficult, though, particularly in high-density areas such as Fisherman’s Wharf. “I can understand the enthusiasm for roller skating together, but some of them have no respect for traffic,” said Alessandro Baccari, executive secretary for the Fisherman’s Wharf Association – which represents a majority of the businesses, restaurants, and hotels along the bayside strip. “Its frightening to people who walk with families,” Baccari said.

Greater communication between the skaters and the neighborhoods they travel through would ease locals’ concerns, he noted. Baccari said he would like to be able to give the skaters a “warm welcome. They’re very nice people.”

The skaters themselves admit to having a”fragile” rela’tionship with local police. “No matter what, wear a helmet and bring the gear,” Miles warned future skaters.

“You only get one chance to fall down out here,” he said.